THE RSPCA Halifax, Huddersfield, Bradford and District branch were touched to hear about an amazing fundraising idea from one of their young supporters who wants to help raise vital funds the animals in their care during the COVID19 Crisis.

Animal lover Zach - who is 8 years old and from Thackley, Bradford - decided he wanted to do something special during lockdown to help local animals 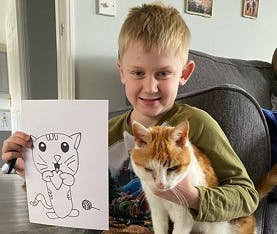 in need. Zach is drawing his own creations and requests from anyone who donates to his fundraiser. They are posted on his Facebook Fundraising group along with sending some copies out digitally or posted to anyone who donates.

All of Zach’s drawings are being uploaded to his Facebook group and donors just comment on the artwork they would like. The young artist takes requests, but says he much prefers to do his own style of ‘doodle’ rather than a pet portrait. There are plenty of examples of Zach’s artwork to view on his page, including a penguin, an owl a monkey and even an alien spaceship!

Mum, Jemma Walker says “Zach has always been a great animal lover and our family adopted 2 kittens from the local RSPCA in Bradford almost 16 years ago. Sadly, we lost one of our cats last year but we still have Bailey (pictured above with Zach) and who Zach loves so much that it inspired him to help out the charity during lockdown. The fundraising total currently stands at £283 with more donations coming in and we’re even laminating and sanitising any artwork requests for delivery too!”

All funds raised from Zach’s artwork fundraiser will go directly to help the self-funded local RSPCA animal centre. Fay Gibbons, the Digital & Community fundraiser for the branch says “Zach really is a hero in our eyes – it’s been an incredibly difficult time for us here at the centre with all of our Charity Shops closed and fundraising events on hold for the foreseeable future, so all of the money raised will go a really long way in helping us to care for local animals in need. Well done Zach, you’re a superstar!”

To find out more about the fundraiser or to donate and get your hands on your own doodle by Zach, visit his Facebook group here: https://www.facebook.com/groups/274053893770543.

The RSPCA Halifax, Huddersfield, Bradford and District Branch are a self-funding branch of the National RSPCA, responsible for raising money locally to support our animal welfare work. Our main aim is to rehabilitate unwanted, abandoned and abused animals and find them loving, permanent homes. The local rehoming centre relies on public donations and the generosity of its local community to keep the doors of their animal centre open. The branch care for cats, dogs and small animals and have successfully rehomed 40 dogs, 60 cats and 10 small animals so far this year.