Ramsdens Solicitors, has won an award based on the excellence of their work in ‘heir hunting’, or probate research – the process of helping next of kin become reunited with estates they often had no idea existed - at the 2020 The UK Probate Research Awards – otherwise known as ‘The Probies.’ 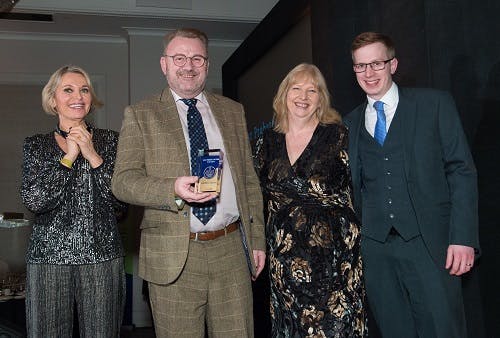 Presented by the BBC’s Nikki Bedi, the Awards, supported by the National Association of Licenced Paralegals (NALP), Red-Inc, Just Clear and Finders International, gives recognition to probate research as a profession, which leads to a constant stream of fascinating news and personal finance stories, while providing an invaluable public service.

Heir hunting, the profession made popular by the BBC TV programme by that name, uncovers complex stories of family trees, while providing instrumental research and essential services to support the legal world, tasked with winding up estates when individuals pass away.

Ramsdens, a full practice law firm with 15 office across Yorkshire, and which won in the category of Best Probate Law Firm for the North of England, was commended by judges for their high levels of service under often difficult and emotionally charged circumstances.

Michael Robinson, Associate in Ramsdens Private Client, team commented: “It was a great night at the 'Probies' not only because we won 'Best Probate Law Firm - North 2020' (for the second year running!) - but we enjoyed a well organised event with other nominees, including law firms from across the country, genealogists from around the world and also specialist companies. A big thank you to the organisers of the event, Meerkat PR, and their sponsors."

Alzheimer’s Society, the charity leading the battle against dementia, benefited from the silent auction which raised more than £2,500 during the event.

Beyond awards: A story of human interest which captured national interest

Margaret Abbotts, 81, of Putney London was a member of the public invited to The Probies, to receive the award for Best Story Of Human Interest. Having led an extraordinary life to date, including surviving The Blitz during the war, polio and having been told she should never give birth, Margaret went on to have four children, and succeeded against all the odds of life.

What she did not know was that she had a half-sister who died intestate (without a will), and that the efforts of probate researchers allowed Margaret to inherit what her sister had left behind. This lucky and unexpected windfall supports Margaret in her well-deserved retirement today. The story was featured on ITV’s This Morning with Eamonn Holmes and Ruth Langsford, in addition to The Daily Mail and Guardian.