King James’s School football teams are sporting a new look thanks to a contribution by local recruitment agency Stafflex.

Football is far and away the most popular sport at the school and with the help of Stafflex, the school were able to offer the shirts to the kids at a reduced cost which greatly increased take up. In total, over 100 shirts were ordered supporting five boy’s teams and two girl’s teams as well as the current West Yorkshire champion Futsal team at key stage 4. 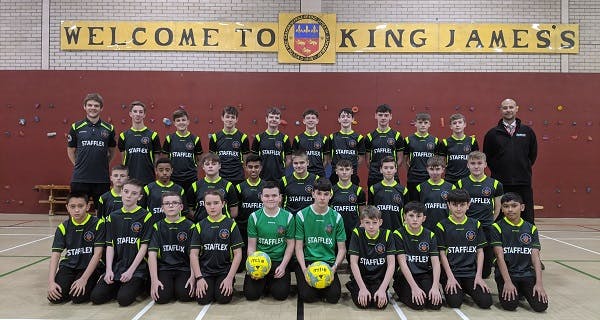 Stafflex branding appears on the front of the shirts as the main sponsor and is also shown across the team polo shirts worn by staff for fixtures.

Thomas Day, Head of Boys PE at King James’s School commented: “We’re extremely grateful to Stafflex for contributing towards the football shirts and for them allowing us to overhaul our kits for the benefit of so many pupils. A good kit really can be an excellent incentive, and the tipping point, for some kids to join an extracurricular club and take up a sport.”

“Both boys and girls are really pleased with them, many wear them as their preferred PE kit for lessons and some have even worn their squad numbered shirt for non-uniform day!”.

Peter Joseph, education consultant said: “We appreciate the difficult period that schools are currently experiencing in terms of reduced budgets and so it’s great that we can help offset this even by a small amount with the kit sponsorship.”

“We hope that the new kits will install confidence and pride for the team on the playing field!"

Stafflex has had long standing relationship with King James’s School which stretches back as far as 2005.