BAFTA award-winning screenwriter, director and producer Sally Wainwright, who is known internationally for writing the hit TV dramas Gentleman Jack, Happy Valley and Last Tango In Halifax, has today been announced as a patron of The Piece Hall Trust charity.

Born in Huddersfield and raised in Sowerby Bridge, Sally started her writing career with a stage play called ‘Hanging On’ at Edinburgh Festival before writing for the Radio 4 series ‘The Archers’ and ‘Coronation Street’. She then went on to create ‘Last Tango In Halifax’, which won BAFTA Best Drama Series 2013, and ‘Happy Valley’, which won BAFTA Best Drama Series in 2014 and 2015 and Sally won the Best Writer Award on all three occasions. Both dramas also won several other national awards. 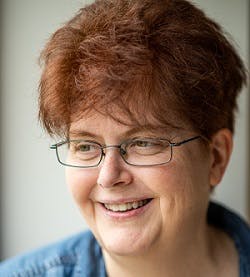 Her latest creation, ‘Gentleman Jack’, tells the incredible story of Anne Lister, an extraordinary Halifax landowner, diarist and traveller who kept diaries of her daily life including her lesbian relationships. The show has been a phenomenal success across the globe and along with the Piece Hall regeneration and cultural revolution that has taken place in the Borough over the last few years, the area has become of the UK’s top tourist destinations.

Sally Wainwright comments, “I am delighted to become a patron of The Piece Hall Trust and lend my support to the whole enterprise around this magnificent building. The Piece Hall has played a huge role in the regeneration of Halifax and its one of my favourite places -there is no other place like it. The Piece Hall Trust have done a fantastic job and I’m proud to be on board.”

Patrons of The Piece Hall play a vital ambassadorial role for the Trust, championing the charity, its development and Halifax within their spheres of influence. Other patrons include world record breaking paralympian Hannah Cockcroft MBE, England rugby legend Brian Moore and Hollywood Film Director Mark Herman.

Nicky Chance-Thompson DL, Chief Executive of the Trust, commented: “The Piece Hall Trust is absolutely honoured that Sally is now one of our growing number of amazing Patrons. Sally is one of the most loved and influential figures in Halifax and to have her support will be invaluable. Sally has already done so much for the region and we are delighted to be working with her.”