Published 3rd May 2019 by Shaida Khan

​Sunday’s game against Manchester United is set to be the final home fixture of Dean Hoyle’s decade-long tenure as Chairman, with a commercial agreement in place with Phil Hodgkinson for the sale of the Club.

Having taken over as Chairman and owner in the summer of 2009, Dean has led the Club into its most successful spell in 40 years, taking the Terriers from Sky Bet League 1 to the Premier League for the past two seasons. 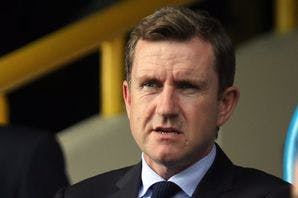 As well as bringing success to the pitch, the Club has also become renowned for its philanthropy under Dean, beginning with the life-saving relationship with the Yorkshire Air Ambulance and continuing through the excellent work the Town Foundation charity carries out in the local community.

Completion of the sale, which will see Hoyle retain a minority stake in the Club, with fellow lifelong Town fan Phil Hodgkinson stepping into the role of Chairman and taking 75% controlling ownership, will be subject to approval from the relevant football authorities.

Phil, who is CEO and Founder of the PURE Business Group, is well known to the Club and its fans alike.

The logo of one of his companies, PURE Legal Limited, appeared on the team’s home shirts from 2015, including the 2016/17 Championship promotion season, as well as on the sleeve during the Club’s first Premier League campaign. More recently, the PURE Business Group became the title sponsor of the Huddersfield Town Academy.

Accordingly, Phil is to step down from his role as an Owner and Director at National League North side Southport, where he has been since September 2017. Under his stewardship, Southport achieved record season ticket sales last summer and established plans for a significant stadium investment.

A member of the Young Terriers in his youth, Phil was a Season Card holder before his company’s involvement with Town, when he has watched the games from a hospitality box in the Revell Ward Stand.

He is an FA qualified Youth Coach and has also worked as a Football Intermediary previously.

Outgoing Chairman Dean Hoyle, who will remain on the Board of Directors, explained:

“My heart doesn’t want me to sell the Club and I believe the Manchester United game will probably be the most emotional day of my life. However, my head is telling me that, after 10 years of total dedication and my recent ill health, I need to do what is right for myself, my family and Huddersfield Town and that is pass the reins to a new Chairman who can take our Club to a new chapter in its history.

“I have run a full sales process and there was serious interest in the Club from around the world. Appointing the correct successor is as important to me and my legacy as everything else I have achieved. I have chosen Phil not just because he is an astute business man with strong desire and determination to succeed, but because as ‘one of our own’ he will always have the Club’s best interests at heart. He’s a Town fan and he really gets what this Club is all about.

“I still cannot believe that my time as Chairman is coming to an end. I’d like to take this opportunity to thank every single Huddersfield Town fan for their incredible support of my family and me during the last decade. We’ve had an unbelievable time together with the Club, creating memories that will last a lifetime.

“I’d also like to thank every member of staff at the Club, in particular my Board of Directors. We have some amazing people behind-the-scenes who have dedicated their lives to Huddersfield Town and I know their dedication and skill will be a big asset to Phil moving forwards.”

“I will be delighted and proud to be able to take the position as the new Chairman of Huddersfield Town. As a lifelong Town supporter, it will be a special day for me and my family.

“I must thank Dean Hoyle, not just for the way he’s conducted himself throughout this process but for what he has done for the Club over the past decade. He’s totally re-engaged the supporter base and has made elite football available to the masses. In football, I believe it’s incredibly rare to have that scenario when you arrive as a new Chairman.

“Dean’s continued support and counsel will be invaluable to me as we move forward into the new season and beyond.”

“Huddersfield Town is in my blood and has always been one of my greatest passions. I’m so excited to have the opportunity to take this Club forward.

“My number one priority is to give every support I can to Jan Siewert in order to make us as good as we can be on the pitch. Our aim is to get back to winning football matches and to put smiles back on the faces of our supporters after a tough season.

“The Club has got a very busy summer ahead of it, for sure, but I will be a hands-on owner and fully focused on trying to ensure we get the best start possible to next season.”

Formal completion of the sale of the Club is expected to be confirmed over the closed season, once the relevant approvals have been obtained. Until then, Dean will retain control as the Club prepares for the best possible start to life in the Sky Bet Championship.