The Wilson Walk, sponsored by Lister Horsfall, has raised an incredible £64,579 for the Yorkshire Air Ambulance and the Alzheimer’s Society!

The Club is proud to announce this new record amount for a Walk for Pounds event on the day that the legendary Town full back and World Cup winner was born back in 1934. 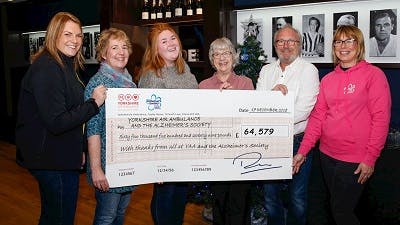 Ray was sadly lost to Alzheimer’s disease in May 2018 and the funds will be split 50/50 between the Alzheimer’s Society and Town’s charity partner the Yorkshire Air Ambulance in his honour.

Members of Ray’s immediate family, including his wife Pat, joined the Yorkshire Air Ambulance’s Katie Collinson and Julie Lee from the Alzheimer’s Society to present the cheque in the John Smith’s Stadium Boardroom.

165 Town supporters took part in the walk to the Premier League game at Burnley on 6 October 2018, which was the fifth ‘Walk for Pounds’. In total, this year’s challenge has taken the total amount raised for good causes to an amazing £176,194.

“On behalf of everyone at the Club, I would like to thank all 165 supporters that took part in the Wilson Walk, as well as everyone who donated or contributed to this amount.

“Thanks also to Lister Horsfall, whose fantastic support made this incredible event possible.

“The generosity of Huddersfield Town fans has been shown time and time again, but this season’s walk – held in honour of Ray – clearly captured their hearts and imagination. We’re delighted that we could do Ray and the Wilson family proud in this way; it’s hugely fitting that this walk has set a new fundraising record.

“I’m sure the money raised will make a real difference to two fantastic causes.”