David Cowgill, Associate at Schofield Sweeney, has been appointed as President of the Leeds Law Society.

David served as Deputy President for the last 12 months and was unanimously elected President at the Leeds Law Society’s AGM. His term of office commenced on 1 June this year. 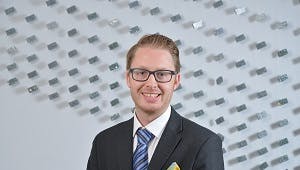 David commenting on his appointment said: “It is an honour to be elected as President of the Leeds Law Society and I am look forward to representing the interests of solicitors and law firms in Leeds. My theme for the year will be engagement and collaboration with a particular focus on access to the profession and working with junior members who represent the future of our profession.”

David Cowgill has been a solicitor in Leeds since qualifying in 2009 and has been a committee member of the Society for over 7 years.

Schofield Sweeney can now boast two Presidents at the firm as Ashley Iredale, Partner, holds the post of President at the Huddersfield Law Society. Rebecca Beaumont, Associate, is currently the Deputy President of the Bradford Law Society meaning the firm is represented in each of the locations in which it has an office.