Katrina Cliffe, the Managing Director of Huddersfield-based PR, Marketing and Social Media agency, KC Communications, has successfully completed a trio of 10k runs, and a mini-triathlon to raise money for babyloss charity, Tommy’s.

Over the last two months, Katrina has completed three 10k runs in Manchester, Lindley and Leeds, plus a mini triathlon, which has seen Katrina raise over £1,000 in sponsorship for the charity who support research into miscarriage, premature birth and stillbirth.

Over the past 14 years, Katrina and her husband John Cliffe, have collectively raised over £10,000 for Tommy’s, the baby charity. 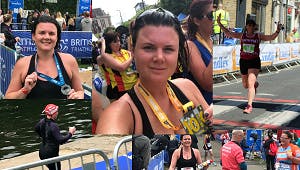 Katrina commented, "Babyloss is an issue which affects thousands of families every year but is still rarely talked about. Babyloss has a profound physical and mental impact both in the aftermath and many years later which is why I continue to support such a vital organisation. The runs themselves were a huge challenge as I only started training mid-April and the heat during all four events was horrible, but I am proud that with each one my time improved and I finished with a 10k PB”.

Even though Katrina has already raised a significant amount for the charity, she has no plans to stop, stepping up her distances to take on the York 10 Mile run in October, and the Leeds half marathon next year.

In the meantime, if you would like to add to Katrina’s fundraising efforts, you can do so by texting: KCCC83 AMOUNT to 70070 or visiting www.virginmoneygiving.com/katrinacliffe