Two former students who have gone on to high profile successful careers returned to Kirklees College today as ‘Huddersfield Heroes’.

Entrepreneur and Huddersfield Town Chairman Dean Hoyle and Siobhan Greene, who is head of television at Syco TV, were the guest speakers at the Huddersfield Town Enterprise Academy (HTEA) networking meeting this morning.

HTEA is a joint partnership between the college and Huddersfield Town AFC’s commercial team to bring business people in the town to meet and work together.

The Huddersfield Heroes event was held in the college’s Landings 72 Restaurant and guests enjoyed a hearty breakfast prepared by staff and students before hearing from the speakers. 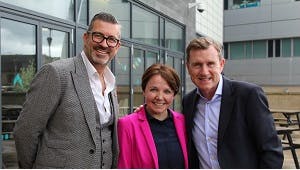 Head of Sales and Marketing at Kirklees College Lydia Butterworth said: “As someone who is Huddersfield born and bred, I’m immensely proud of our town and the accomplishments of its residents.

“It was fascinating to hear from our alumni: Dean and Siobhan who were informative and entertaining in equal measures.”

Dean, who is originally from Heckmondwike, was at Dewsbury and Batley Technical and Arts College (DABTAC) as an engineering apprentice in 1984.

He founded Card Factory, a chain of greeting card and gift stores, alongside his wife in 1997. By 2009 the company had over 500 stores, employing in excess of 5,000 people.

In 2010 Dean sold the business as he was being awarded a host of accolades in the field of entrepreneurship, including Ernst & Young’s ‘North and Midlands Entrepreneur of the Year’ in July 2009 and Chadwick Lawrence’s ‘Business Person of the Year’ in November 2011 at the Huddersfield Examiner Business Awards.

Dean joined the Board of Directors at Huddersfield Town in April 2008 as Chairman-elect, eventually taking over as Chairman in June 2009.

Siobhan Greene, who is originally from Shelley, is Head of Television at Syco TV, and producer of some of the biggest shows on UK TV including X Factor, Stepping Out and Ant and Dec’s Saturday Night Takeaway.

Siobhan started her career at Yorkshire Television in Leeds as a typist, after learning the skill as a student at Huddersfield Technical College.

She worked as a runner, then researcher on The Time The Place, and fly on the wall documentary series Jimmy’s, before moving to Granada in Manchester to work on Stars in their Eyes and You’ve Been Framed. During her time, she co-created Popstars the Rivals and Ant and Dec’s Saturday Night Takeaway.

In 2003 she left ITV to set up Syco Television alongside Simon Cowell and Nigel Hall where they co-created and executive produced The X Factor and Britain’s Got Talent.