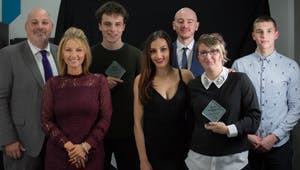 Awards were presented in each curriculum area as well as overall prizes for Education and Training Student of the Year and Apprentice of the Year.

A number of students also received Armytage Awards, which include a cheque for £100.

The awards originated from the Thomas Armytage’s Technical School Endowment of 1879, and are presented to students for academic performance, contribution to college life and personal qualities.

The award for Apprentice of the Year was won by Construction student Onome Benson.

Nigerian-born Onome, 35, from Golcar, is studying a Level 2 Plastering Apprenticeship with MBS Renovations.

Originally Onome was on a full-time course but after doing exceptionally well on a work placement, the employer offered him a job as an Apprentice instead.

Alongside doing his Apprenticeship, Onome is a carer for his wife and also has a part-time job to support his family.

Tutor Kevin Byrne, who nominated Onome said: “As an apprentice he is developing exceptionally and is more than on target to achieve. As he speaks English as a second language, he sometimes struggles with the theory side of the qualification, though this does not deter him as he puts in an enormous amount of extra study to give himself every opportunity to pass.

“Onome’s employer said he has already proved to be a real asset to the company. He is a pleasure to work with, he communicates well at all levels and shows lots of support with other learners who sometimes struggle on practical tasks. There is much to admire about Onome and how he goes about his daily very busy business and never complains, he is a credit to his family.”

The Education and Training Student of the Year award was won by business student Fenton Shaw, from Thornhill Lees in Dewsbury.

Fenton has been a student at Kirklees College for five years. Although he has serious health issues and uses a wheelchair, he is very independent.

Last year he was a victim of a serious assault, but did not let that stop him from coming to college.

Richard Sands from the college’s Student Support team nominated Fenton. He said: “Fenton never lets anything stop him from enjoying his life. He is a very polite young man who speaks to everyone and brightens up our days.

“He knows no barriers. He has come so far against many obstacles and not given up when it would have been easy to do so.”

Principal Marie Gilluley said: “Our COLS Awards recognise our outstanding students who have excelled in their studies, overcome difficult circumstances or have transformed their lives.

“Selecting the winners was a very difficult yet rewarding task for the judging panel. There are some truly inspirational stories, and we congratulate not just the winners, but all those nominated.”

The college was delighted to have received sponsorship from local businesses for individual categories and the overall prizes.

Representatives from the companies were invited to attend the event to present awards in the category they sponsored.