Following Huddersfield Town’s spectacular rise to the premiership this season, the club and leading Huddersfield organisations and businesses are joining forces to make the most of the worldwide media spotlight, to raise the profile of both the club, and now the town.

Commercial Director, Sean Jarvis said: “We’ve been completely blown away by the interest in Huddersfield Town since May, but we’re a club that is firmly rooted in its town, and extremely loyal to the thousands of fans who have helped get us here. We see that this isn’t just our moment, but a great opportunity for Huddersfield to raise its profile to an audience of over 3 billion people around the world.” 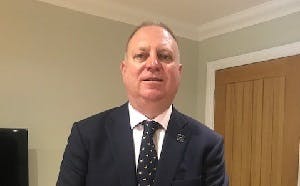 #backinghuddersfield is a simple show of support for Huddersfield, demonstrated by wearing a specially-commissioned ‘H’ lapel pin badge, featuring the 3 stars from the football club’s crest, and carrying a simple concertina business card which carries key facts about the town which make it a premier destination.

“I’m meeting people from all over the world just now, and everyone is interested in Huddersfield’s back story – what we are, and what we stand for. Wearing a lapel pin is a very simple but effective show of support for our town, and it’s something we at the club are proud to be supporting. We want others to help us spread the word too, with a viral social media campaign using the hashtag #backinghuddersfield. It’s no secret that we have some pretty high-profile fans, so you can expect to see some famous faces wearing their pins with pride at this weekend’s game too.”

Lapel pins have been given to all 250 businesses attending this morning’s Business Breakfast at the John Smiths’ stadium on the subject ‘Huddersfield Town – the impact of the first 100 days’, and also to other leading Huddersfield-based organisations, including the Chamber of Commerce, the council and Huddersfield Choral Society, who are backing moves to promote the town. Local residents, fans and businesses are asked to share news, facts and stories using the hashtag.

Martin Hathaway, Chief Executive of Mid Yorkshire Chamber of Commerce said: “We’re delighted to be playing our part in promoting Huddersfield. Like Sean, we’re seeing a huge swell of interest in the town, and are doing an increasing number of interviews with radio and TV stations from all over the world –that’s unprecedented. Being able to tell a consistent and positive story about our town is so important for us all, if we’re to really harness the wider benefits of being in the Premiership. And I’m sure that’s a sentiment which is shared by the businesses we represent.”

The concertina business cards will be available in the Club’s shops, through the Chamber, and from the council’s Customer Services Centres in Huddersfield and Dewsbury; but for now, you will only be able to get your hands on a lapel badge with a personal referral from a fellow wearer.