Sweet dreams thanks to TAB

A Batley furniture component company has recorded record growth just two years after the MD almost closed it down and called it quits.

Now rather than shutting up shop Sampson Products, whose brands include Vinor Bedmakers, is working flat out to fulfil orders for existing customers and is attracting regular good quality new business. 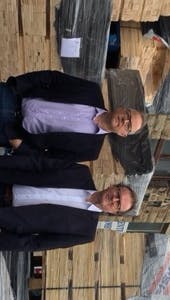 Simon Banks started Sampson Products after 25 years in a job with the same firm which was secure but lacked the job satisfaction he craved.

“I wanted to prove to myself that I could run my own business, I felt I had it in me but had previously lacked the bravado to leave a secure job and do it,” he said. “Sampson Products was a failing manufacturer that made components for the bed industry and I was armed with 25 years experience and tonnes of enthusiasm that I felt would help pull it round”.

But he quickly realised he needed more than that. Two years in and Simon was struggling with production inefficiencies, poor staff behaviour and making those tough management decisions on his own.As the pressure mounted, Simon was contemplating giving it all up to re-join his ex-employer who had offered him his old job back.

“The problem for me was that others relied on me for their livelihoods, suppliers had given me credit on trust and I did not want to go back to my old employer branded as a failure, so I was determined to make Sampson Products work.”Simon’s salvation came in the form of a Wakefield business mentor, Dougie Brown.

“Dougie invited me to attend The Alternative Board to see what it was like.Despite my scepticism I quickly realised the other members of the board could help me.”

“The Alternative Board is made up of other company directors, often facing similar challenges on their own.At the first meeting they helped me recognise what my real issues were and then formulate a solution,” he said.

“It was a game changer and helped to save Sampson Products.I was able to go back to the factory and implement subtle changes that made a massive difference.

Simon hasn’t looked back and Sampson Products is not only successful, but is growing and expanding.He believes that TAB membership and his fellow TAB members have played a key role in that.

“I was cynical about TAB at first but it has genuinely made a huge difference to Sampson Products and this year I was awarded UK TAB Member of the Year which is great recognition of my progress as a TAB member and the significant progress Sampson Products is enjoying”.

“Dougie Brown added: “Simon joined TAB with an element of scepticism. However, he is an experienced man, makes decisions quickly and was determined that under his leadership a success could be made of the ailing business that he had taken over.

“Simon has transformed his business and played a valuable part in enabling others to do the same. He is valued for the quality and clarity of his advice, his directness and preparedness to be controversial and offer "alternative" perspectives that buck the trend.”