LBA records its busiest ever week

Leeds Bradford Airport has recorded its busiest ever week; with more than 107,000 passengers travelling through over a seven day period.

With such a strong start to the summer season, the month of June could be the busiest month in the airport’s history. In the last 12 months, more than 3.6m passengers have travelled through the airport. 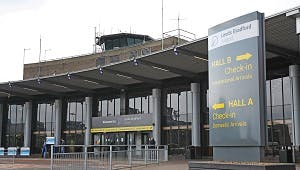 The top five departing destinations for summer last year were Palma, Alicante, Malaga, Dublin and Faro and these trends look set to continue.With more than 70 direct destinations available from LBA across 16 major airline and tour operator partners, there are also new routes this summer; Almeria, Halkidiki, Berlin, Warsaw, Vilnius and Newquay. Thomas Cook have also returned to LBA this summer.

“These passenger numbers are really encouraging and it’s great to set a new record of passengers coming through Leeds Bradford Airport. This achievement is a real team effort; working closely with all our partners has made this possible.

“We will be focusing continually on driving up standards here at LBA and we have undergone major developments in the terminal over the winter. Therefore, passengers travelling through the airport will notice significant changes and improvements in the coming weeks and months.

“We aim to be the number one airport of choice for passengers in the region and I have a clear vision as to how we can achieve this. I very much look forward to a busy and successful summer and beyond.”

In addition to this, performance statistics for 2016 put LBA in second place nationally for its overall on-time performance.

Leeds Bradford Airport has undergone major investment in the terminal over the winter. This has seen the opening of Boots, as well as a new unit stocking several Yorkshire sports team brands and FatFace. This week will see the opening of an extra seating area in Saltaire Bar. The Sports Bar is also due to re-open after work in the departure lounge area has progressed.

A newly introduced bag drop area in check-in hall A is proving popular with passengers and an extra security lane has been opened.