The Managing Director of one of West Yorkshire’s most established legal firms is celebrating a double landmark: ten years at the helm and twenty-five years of service. 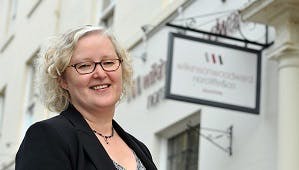 Over the past decade Maureen has steered Wilkinson Woodward through huge changes in the legal arena including the closure of local courts, the demise of legal aid and the disappearance of many longstanding law firms.

Despite this challenging backdrop, Wilkinson Woodward has continued to expand and respond to the changing nature of legal services. Mrs Cawthorn oversaw the firm’s 2012 merger with Huddersfield legal practice Norcliffe and Co and a second merger in 2013 with Bearders Solicitors of Brighouse.

The firm’s Head of Property and Commercial Andrew Crabtree commented,

“Under Maureen’s leadership, Wilkinson Woodward has been able to embrace huge changes in the legal sector and expand into our neighbouring towns of Huddersfield and Brighouse. We congratulate Maureen on her achievements and look forward to more exciting times ahead as we continue to evolve and expand.”

Alongside her managerial and leadership responsibilities, Maureen continues to practise law, handling a busy caseload of notary, employment and litigation work. As a Notary Public (one of just two Notaries in Halifax), Maureen helps a wide range of clients – from couples wanting to marry abroad to global PLCs trading on an international stage.

Outside work, Maureen volunteers as a trustee of The Next Step Trust - a Halifax-based charity for young adults with complex needs - where her legal expertise and management experience are often called upon to further the work of the charity.