West Yorkshire based, Propack Direct Mail is delighted to announce they will be partnering with Huddersfield racing driver Daniel Lloyd and the MG RCib insurance racing team for a full campaign in the British Touring Car Championship this year (BTCC).

Propack, who specialise in Digital Print, Direct Mail, Distribution and Postage, servicing many major blue chip clients including; Sky Bet, Travis Perkins and GHD will take full advantage of the nationwide brand awareness provided by the BTCC and its coverage on ITV4. 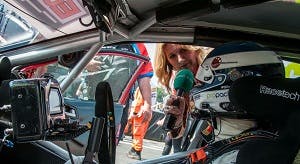 The Championship, which is the biggest Motorsport series in the UK, regularly achieves crowds in excess of 37000 at each meeting and reaches 17.2m television viewers throughout the season.

Jason Clough, Commercial Director said “Daniel is a real ‘Local lad done good’ story, our partnership is not only a great way for us to show pride in the region it’s also a wonderful way to provide first rate hospitality to our national client base. Seeing the smiles on the faces of our clients and receiving the wonderful feedback after attending the races is brand-building gold.”

25-year-old Lloyd made a spectacular addition to the BTCC grid during his three appearances in 2016 - qualifying on the front row at Croft and Oulton Park in the Eurotech Racing Honda Civic Type R – he is now set to make his full season debut in the RCiB Insurance race-winning MG6 machines.

Daniel Lloyd said “I loved competing in the BTCC last year and to have the chance to step up and join the MG factory team with Propack behind me is a fantastic opportunity”.

The 2017 Dunlop MSA British Touring Car Championship season gets underway with the first meeting at Brands Hatch, Kent on April 2nd. ITV4 will feature live race day coverage from all 10 race weekends of the 30-round championship.