After a successful 2016 season on the European Tour, where Chris finished 108th on the Order of Merit and secured his playing rights for the following season, Abzorb pledged their continued support for 2017.

Chris will again wear the Abzorb logo on his collar and golf bag panel throughout the year whilst playing worldwide on the European Tour in over 25 events. 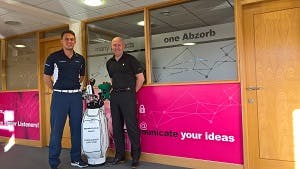 Chris: “I can't thank Abzorb and Steve Beeby enough for their support in my rookie season on the European Tour; having their support had a huge impact on my performance throughout the year and retaining my Tour card for the 2017 season.”

The new season soon kicks off in South Africa followed by the famous Middle East swing, including the Dubai Desert Classic where Tiger Woods has also committed to play.

Director of Abzorb, Steve Beeby, added: “It's been great to watch Chris progress through the year with some fantastic finishes in top quality fields and we are delighted to be associated with a local European Tour golfer."