One of the region’s most established businesses is celebrating after notching up one hundred and thirty years in business.

Wilkinson Woodward has been trading from premises in Fountain Street, Halifax since 1886, when the town was still a formidable force in the world textile industry. Since then, the firm has evolved into one of West Yorkshire’s most established and trusted legal practices.

Over a history spanning in excess of 47,000 days of trading, Wilkinson Woodward has witnessed many changes. 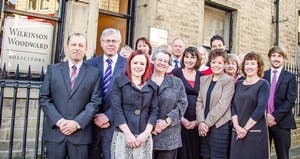 The practice was founded in 1886 by local solicitor Robert Wilkinson. He was succeeded in May 1936 by Gordon Woodward who was joined two months later by Harry Ludlam, when the name “Wilkinson Woodward & Ludlam” was adopted. Harry went on to become Mayor of Halifax and was a highly respected and well-known figure in the town.

Today, with a team of over thirty lawyers and fifty support staff spanning premises in Halifax, Huddersfield and Brighouse, the firm’s main focus remains on serving the communities of Calderdale and Kirklees. The practice thrives under the leadership of Managing Director Maureen Cawthorn. Maureen said:

“Wilkinson Woodward has been serving the people and businesses of Halifax since Queen Victoria’s reign. During the past 130 years, the practice has grown and developed whilst still remaining true to our ethos of serving the local community.”