Paxman, a family-owned medical device company, announced today that it has filed a 510(k) application with the Food and Drug Administration to market an advanced scalp cooling technology for the prevention of hair loss in women undergoing certain forms of chemotherapy for breast cancer. 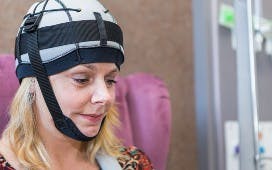 The pioneering Paxman Scalp Cooling System device, developed in the UK, has been shown in clinical trials to preserve hair in more than 50% of the women who used it.

The ground breaking data submitted as part of the FDA premarket notification was presented as a late breaking abstract at the recent San Antonio Breast Cancer Symposium (SABCS) in 2016.

Researchers described the data as the first-ever randomized clinical trial to evaluate modern scalp cooling. The researchers concluded that the Paxman system is safe and effective in reducing hair loss in women being treated with chemotherapy for breast cancer, especially for those on taxane-based regimens.

It revealed that 50.5% of women in the scalp cooling group had hair preservation, while none of the women in the no cooling group preserved hair. The success rate allowed the researchers to halt the study and release the findings.

“With society’s emphasis on a woman’s appearance and the cultural significance of a woman’s hair, it is no wonder that women find the prospect of losing their hair as one of the most distressing aspects of the disease and its treatment,” said Richard Paxman, CEO at Paxman.

“It is such an honour that our clinical trial findings used in the FDA submission were chosen to be presented as a late-breaking abstract at SABCS. This is a real privilege for not only the researchers involved but for all the patients that took part in the trials.”

Clinical trials to evaluate the effectiveness of the technology were headed up by Julie Nangia, MD, assistant professor of medicine at Baylor College of Medicine, Houston.

In addition to the Lester and Sue Smith Breast Center at Baylor, which is a part of its NCI-designated Dan L Duncan Comprehensive Cancer Center, clinical trials involving a total of 186 women were conducted at a number of other sites in the US including: Cleveland Clinic, Memorial-Sloan Kettering Cancer Center, Carol G. Smith Cancer Center in Morristown, NJ and several US Oncology sites (Baylor Sammons Cancer Center in Dallas, Medical City in Dallas, and Memorial Hermann Memorial City Medical Center, Houston).

Hair loss is a well-known side effect of many chemotherapy regimens, with many patients reporting it to be the most traumatic aspect of their treatment. Scalp cooling provides a proven alternative to hair loss, resulting in a high level of retention or even complete hair preservation, improving patients’ self-confidence and creating positive attitudes towards treatment.

The Paxman scalp cooling technology, which is used in more than 2,000 hospitals, clinics and treatment centers around the world, involves a form-fitting silicon cap in which a coolant is circulated to reduce the temperature of the scalp. It is believed that cooling the scalp reduces the amount of chemotherapeutic agent that reaches the hair follicles and causes hair loss. The cap is worn before, during and after chemotherapy sessions.

Women enrolled in the trial were treated with anthracycline or taxane-based chemotherapy for at least 4 cycles. The trial has ceased accruing patients.

Paxman said it expects the FDA to respond to the application in 2017.

I am pre-celebrating for you out there who soon will have an option to keep your hair while going through treatment. Bravo Paxman team! I thank you !!!