Wakefield businesses have placed pride, passion and partnership at the heart of a four point plan to boost the city centre and make it the go to destination for careers, shopping, leisure and entertainment.

Launched by Wakefield Business Improvement District (BID) the plans, which need the backing of business in the centre that lie within the district, would give more control of budgets and decision making to independent companies to promote the city and attract more visitors to help boost the economy and improve the local trading environment. 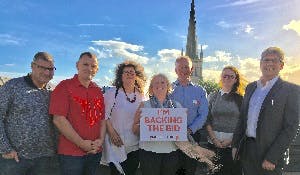 The BID will raise more than £340,000 annually to spend on new additional features and attractions to improve the appearance, ease of access, navigation and safety for all visitors to Wakefield through a five year investment & development partnership between retail, hospitality, professional services and offices.

Before work can start on branding, marketing and upgrading services Wakefield BID must win a majority vote in favour of the scheme from eligible business in the area at a ballot to be held in February 2017.

If it gets the thumbs up it will kick start the most ambitious programme of improvements with extra investment in accessibility, events and city centre entertainment, marketing and branding as well as an improved level of street safety and refreshed appearance to the city centre to attract and develop Wakefield to existing and new visitors.

Keen to keep all sectors of the Wakefield economy on board the first year’s plans include investment in the appearance of the city, better parking, improved sign posting and branding to attract new visitors, while in the longer term the BID is ambitious to achieve Purple Flag status which recognises excellence in the management of a city’s night time economy, something Wakefield has always been proud of.

Leading independent businesses and major multiple chains have already given it their support but the chair of Wakefield BID’s steering group, David Owens, of Wakefield Beer Exchange said the independent sector was critical to its success.

“Wakefield BID has been two years in the making; developing the actual business plan has taken a lot of time and consultation with all stakeholders,” he said. “We were determined that each of the retail, hospitality, professional and night time economy sectors felt they had contributed so we canvassed them widely to find out what they really wanted to see and what they thought would make a difference to their Wakefield.

“Different businesses wanted different features, but they were united by a common cause – to develop Wakefield’s unique brand, market it beyond the city boundaries to attract more visitors and provide them with more reasons to stay.

“Both retail and the hospitality sectors can see the obvious benefits for them with more visitors spending more money, but the professional services also appreciate that investment in the city centre will boost their businesses,” he said.

“Legal, financial and property business all depend on highly skilled people to drive growth and understand that a strong retail and entertainment offer will enhance their chances of attracting the best people and keeping them here in Wakefield.

“Wakefield already has a vibrant cultural offer including theatres, live music and art but fails to highlight it to its own audience; Wakefield BID can change that and make sure that the arts play their part to attract and retain visitors to the economy,” Dave added.

To ensure that every eligible business knows about the significant additional improvements to the city centre that the Wakefield BID could achieve, the steering group are attending events between now and the vote at the end of February to discuss with all stakeholders what is in it for them and how they can make it work.