As part of his active CSR policy, Martin Haigh of training and development company Lattitude7 contributed a prize to the Overgate Hospice Sportsman’s Dinner. The prize was a free training day on either personal development or team building and was won by Expect Distribution in Bradford.

Chamber member Martin went along to meet the leadership team at Expect and, together, they scoped the content for an interactive day for a group of their middle managers. Martin delivered the full-day training and said that there was much enthusiasm and participation during the session. The participants all threw themselves into the action and challenged themselves with the various activities. 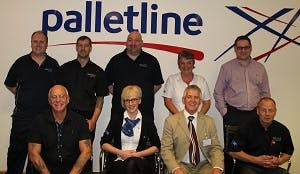 Using a jigsaw metaphor, the participants found that they could achieve more than they ever thought possible, then they articulated their strengths and evidenced all the good things happening at Expect Distribution. We looked at the value of attitude and, using a memory-based approach, the team found out a bit more about each other.

We then examined interpersonal relationships and rapport building and took part in a motivational interview exercise.We used a Preferences Map to discover how individual preferences and styles impact rapport building.This showed that Expect Distribution has a well-balanced team.Finally, in the morning session, we touched on teamwork specifics and examined typical team dysfunctions.

In the afternoon we conducted an inspirational communications exercise and used a fun metaphor to demonstrate the four-stage team model.We uncovered the value of emotional intelligence and looked at ownership and empowerment in team leadership.The team had an opportunity to give each other sincere recognition and they were each presented with a framed certificate of completion.

Martin commented: "It was a pleasure working with the team at Expect Distribution, they worked hard and had some fun at the same time and I wish them every success along their team and business development journey".