The launch of summer flights from Leeds Bradford Airport to the popular southern Spanish city of Malaga is one of ten destinations the airline has flights to during the summer season. The route will also continue into the winter. 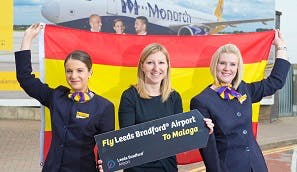 Monarch began flying to the route on Sunday May 1st and will operate flights to Malaga from Leeds Bradford Airport three times a week; Wednesdays, Thursdays and Sundays, with fares, including taxes, starting from £69 one way (£130 return).

Tony Hallwood, Aviation Development Director at Leeds Bradford Airport, said: “I am really pleased to see the introduction of the Malaga route this summer. This service will run through winter too, serving both holidaymakers and overseas property owners throughout the year. It’s been a great first week for Monarch’s Malaga programme here at Leeds Bradford and we’re sure it’ll be a popular choice for our passengers.”

Adrian Tighe, Chief Commercial Officer at Monarch, said: “We are delighted to add Malaga to our Leeds Bradford programme for both summer and winter. Customers now have ten destinations to choose from when flying out of Leeds Bradford Airport with Monarch.”