Chamber Member Social Media Marketing Company, Social Progress has won a place in the National Finals at the UK Blog Awards 2016 to be held at The Park Plaza Hotel, Westminster in London. They are 1 of the 10 finalists shortlisted for the PR, Media & Communications category.

Managing Director, Janet Bebb and Social Media Account Manager, Esther Orridge were amazed to get to the finals. Janet explained “We never envisaged getting this far. It’s thanks to all our friends, family and online social media community that we’ll be venturing on a road trip to Westminster, London in April 2016.” 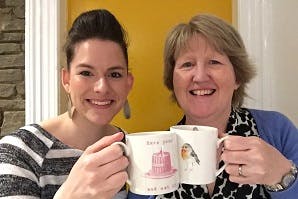 In the first round, the public were asked to vote by choosing their favourite blogs from a list of entries. Honley based Social Progress showcased two blog posts:

The first blog submitted for the award was all about a 5ft inflatable banana which went missing during Fairtrade Fortnight 2015. Social Progress launched the MISSING BANANA Campaign across social media (as well as putting fun posters up around the area) which subsequently received local social media, TV and press attention. The banana was miraculously found by local Honley High School students less than 48 hours of the campaign being launched.

A second blog post was also submitted about Esther’s journey from a three month Internship into her two year-long contract at Social Progress. This success story was through the University of Huddersfield Internship Programme which is financially supported by Santander UK.

Janet went on to say “We’re not usually very shout-y about our work or the clients we work with. So this was a first for Team SoPro and we really didn’t expect to get much from it. But like the classic saying goes: ‘if you never try, then you’ll never know’.”

“We want to say a HUGE THANK YOU to everyone who did vote for us and has supported us. We feel the SoPro love and we’re really excited to be going to the UK Blog Awards at the end of April!”