The Force is Strong for Fulneck School Boys

The weeks running up to the release of the new Star Wars film may have been frantic for its director, J J Abrams, but those weeks have been no less frantic for a couple of young fans from Leeds.

Thirteen year old school boys, Jake Ellis and Ethan Newman, both in Year 8 at Fulneck School in Pudsey, Leeds, have been hard at work alongside their Art teacher Mr John Hargreaves. Turning out each week to the School’s Art Club, they have managed to create a 5 foot (1.5m) replica of the famous Millennium Falcon spaceship, piloted by Harrison Ford in the hit movie.

Their version is a little more down to earth, as it is constructed entirely from old cardboard boxes raided from the recycle bin. It may sound a little low-tech, but it has taken months of work to get to this point, and the resulting model is actually bigger than the boys themselves! 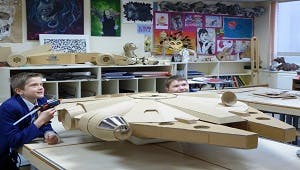 When asked about the project, Fulneck’s Head of Art, John Hargreaves said, “We first started on the project back in late spring, when the movie seemed a long way off. The boys have been coming to our Art Club and adding bits here and there, and their enthusiasm has kept us going. The original idea was from Mr Aaron Murphy, our technician at the time, who is the Schools’ number one Star Wars fan, so it has been quite a multi-generational effort, with the ‘big kids’ working alongside the real kids.”

Model maker Jake explains, “If you look closely, the cockpit contains the Star Wars action figures for Han Solo and Chewbacca, which we picked up on eBay, and they fit perfectly to scale.” When asked which was the most challenging part of the project, his partner Ethan told us, “It was probably keeping my fingers away from the hot glue gun we used, but you only make that mistake once!”

The final model will take pride of place in the Art block, suspended from the ceiling ‘Airfix’ model style, for all the pupils to enjoy. If Mr Abrams needs a couple of spaceship engineers for his next Star Wars movie, he needn’t look in a galaxy far, far away; we have plenty of Yorkshire talent right here to get the job done for him!