The visit was arranged to link in with their current Humanities topic on Democracy and Government Systems. All of the children thoroughly enjoyed this once in a life time experience. Within the House of Commons, they even saw a statue of former Fulneck pupil Herbert Henry Asquith, who is famous for having lead the United Kingdom into the Great War! After the tour, the class joined Mr Andrew in his London office for a question and answer session. 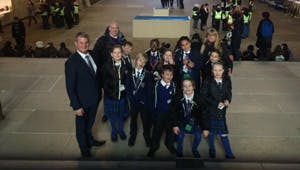 After the tour of Westminster, Year 6 then visited some famous sights of London. They saw the only statue of Henry VIII, Oxford Street (for some shopping!), Piccadilly Circus, Covent Garden (to watch some Street Theatre) and travelled on the underground! They also had time to have their photos taken on Platform 9 3/4 at King's Cross Station.

"This was a once in a life time trip and it was brilliant!" said Ciara Greenway on their return. "Going on the Underground for the first time was epic!" added Annabelle Hallas Fawcett.

Earlier in the autumn term, Year 6 were privileged to invite Mr Andrew to School for a Q & A session in the boardroom, when they asked him some challenging questions about local issues and the Conservative's national policy.

Their study of Democracy and Government Systems was further supported by a visit from Judge Greenway, who talked to the children about law and the judiciary and allowed them to try on her gown and wig!