31 Year 6 pupils from 15 different primary schools across Leeds and Bradford joined forces in the laboratories at Chamber member Fulneck School on Saturday 7th November to solve a mock crime. Using a variety of forensic science techniques, their challenge was to collect evidence from a mock crime scene and process the evidence to solve the crime.

Led by Head of Biology Mr Chris Norris, the free full day workshop began with the children watching a TV news report of an attack on a member of staff from the Science Department at Fulneck School. In groups of six, the young detectives were then taken to investigate the crime scene and look for and gather evidence. Before entering the crime scene, they were briefed on the importance of observation, accurate record keeping and not contaminating evidence; then wearing gloves, the pupils collected, bagged and recorded their findings using evidence cards. A brainstorming session followed to gain information from the evidence found, which included a handwritten note, a hat with hair sample and a powder substance. They discussed the possible motives and the suspects were introduced. 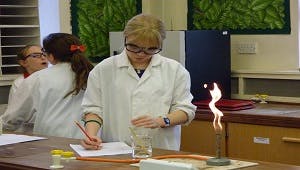 In the laboratories, the young sleuths were introduced to a variety of forensic techniques and carried out a number of forensic science activities. These comprised conducting handwriting analysis; setting up a chromatography experiment; CCTV analysis; hair analysis; flame tests of the powder substances found; finger print analysis; and assessment of witness statements.

Over a hearty hot lunch in the Dining Room, there was plenty of time for the children to discuss their initial findings and early suspicions, whilst acknowledging that thinking they had worked out the identity of the perpetrator was one thing, but producing the evidence to prove this was another!

By the end of the afternoon, with all the investigations concluded, the detectives were ready to state their conclusions and justify them with the evidence.

Ruby from Pudsey Lowtown School said: “I really enjoyed the handwriting analysis. We looked at writing from a left handed and a right handed person and compared them with the note used as evidence.”

William from Battyeford Primary School added: “I liked investigating the crime scene. It was fun to collect the evidence and put it all together.”

Mr Norris’ passion for the subject is already shared with Fulneck pupils who attend his after-school Forensics Club, otherwise known as ‘CSI Fulneck’. The Independent School’s Workshops teach pupils how Science, primarily Biology and Chemistry, is put to great use outside the classroom in solving real crimes.Mr Chris Norris, whose idea it was to run the Workshop, said: "Science is a dynamic and engaging discipline. At Fulneck we are committed to developing the inquisitive, questioning minds that we need in the scientists of the future. This Workshop was designed to enable children to think independently and use their scientific knowledge to solve the problems they were presented with: a skill that real scientists use every day."