We are delighted to announce the appointment of Brian Stahelin as President, succeeding Steven Pollitt who stands down after 12 months in post.

Brian was officially appointed in April after serving as Vice President since 2013. As Managing Director of Huddersfield-based Stafflex Limited, he has almost 40 years’ experience in the recruitment profession. In addition to being a Trustee of Kirklees Active Leisure, he is also Chair of Governors at King James’s School, Almondbury. 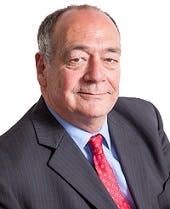 Commenting on his appointment as President, Brian Stahelin said: "I am delighted to be appointed President of the Mid Yorkshire Chamber. I look forward to helping the team drive the organisation forward, and to continuing the campaign to encourage enterprise and business growth within the region.

Outgoing President, Steven Pollitt added: "During my tenure as President of the Mid Yorkshire Chamber I have seen it thrive and grow. I now hand over to Brian, whose vast business experience will stand him in good stead to carry out the post and ensure the continued success of the Chamber."