It was a once in a lifetime opportunity for the students to compete in front of a very large audience at such a prestigious Olympic venue, where only two and a half years ago extremely talented athletes had competed in the very same pool during the London Olympics. 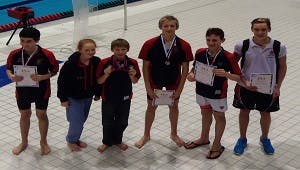 The day consisted of 80 events and the Hipperholme students took part in 8 of those. The day started off well with a win by Myles Stirk. Myles had a 15 metre lead in the first event, the 200 m U16 individual medley, and finished first in a time of 2.17.49, just one second off the national record. Myles also won his 100 m freestyle race and set a new record making him a twice national champion for the ISA North team. Charlie Kershaw was also extremely successful coming 3rd in the Year 8 boys’ 50 m breaststroke, and Harrison Layden -Fritz came 3rd in his event; the Year 9 boys’ backstroke.

After a very successful and long day at the Aquatics Centre, spirits were high as the Hipperholme students left with Gold, Silver and Bronze medals and six beaming faces. Congratulations to all the students who took part and represented the School with such talent and determination!