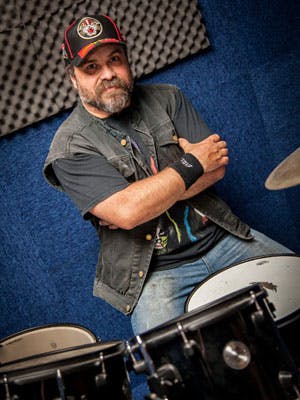 When Huddersfield’s Bob Crolla was made redundant in 2013, he didn’t realise he was on the way to achieving a long-held dream.

Bob, whos is 44 and lives in Slaithwaite with his girlfriend, Mandy, was made redundant from his customer relations job at O2 in Leeds.

He explains, “Following a massive change in the company's structure I was offered a generous redundancy package which I accepted with little consideration. I’d worked for O2 for 13 years and the company had changed dramatically over that time, most notably after the takeover by Telefonica the Spanish telecoms giant. I didn’t really enjoy working there any more so when the opportunity arose I took it.”

When the Jobcentre referred him to the New Enterprise Allowance (NEA) scheme and the West Yorkshire Enterprise Agency, he realised it could help him set up his own studio, something he’d wanted to do for some time. “I’ve been a musician for 30 years and I’d always wanted to own my own studio,” he says, “but I never had the money to set up. The package I got allowed me the opportunity to do this.”

Bob got the keys to a large industrial unit in Huddersfield at the beginning of December 2013 and started work on fitting out the inside straightaway. “The unit is in a great location,” he says, “near to a college and a high school, both sources of potential customers.” By the end of February he’d got enough work done to be able to open Sasquatch Music for business: “I had an open night and invited people to come and have a look around and a glass of wine. I got my first booking several days later and business has been picking up steadily since then.”

The main core of Sasquatch Music is rehearsal studios. Bob hires out the studios to bands on an hourly basis and he also has a fully equipped recording studio, producing professional quality recordings for solo performers and bands.

Most of his customers are young bands just starting out, says Bob, although he’s starting to attract some more established, professional musicians and a number of bands who have regular bookings and who come every week.

Bob says the support of his business mentor from the West Yorkshire Enterprise Agency’s MYMentor network was invaluable to him: “Although I know about music I had no idea how to set up and run a business. Getting help and guidance creating a business plan really helped me to formulate my plans, look at obstacles and opportunities I’d not considered before and work through them in detail. The weekly payments really helped too. Although it’s only a small amount of money, it helped more than I expected during the period before I got paying customers and had no income.”

The studio is still very much a work in progress, says Bob: “I have another two rehearsal rooms to build and also a live room where young bands can put on public performances for their friends and relatives. I’ve also just taken a booking for a children’s birthday party and I hope to do more of these in future.”

There seems to be a real lack of studios catering for younger bands with a limited budget, says Bob, “but I want to fill that gap, creating demo CDs for up-and-coming talent at affordable prices.” Among his future plans is a youth music club aimed at 10-16-year-olds.

In five years’ time Bob says he aims to be a key player in the local music scene: “I want to provide a range of services to bands and musicians. I also want to actively working with, encouraging and developing young talent.” He adds, “If things go according to plan, I’ll have a busy recording studio producing good-quality recordings, four busy rehearsal studios and a live room in regular use. I’d also like to have someone working for me to allow me to focus on the creative side.”

Bob says his mentor, Veronica Baldwin, was invaluable in the whole process: “She helped me focus my ideas and put them into some semblance of order,” he says, “She was also very good at easing my concerns and worries. Setting up a new business is a big risk and it was very much unknown territory to me. It was an anxious time but Veronica was more than happy to answer any questions and offered a lot of very sound advice.”