A Huddersfield entrepreneur has used losing his job as the push he needed to start his own business making fruit vodkas and selling them across Yorkshire. 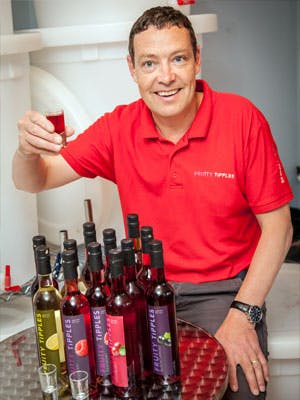 Kevan Baldwin, who is married with two children, was made redundant from his role as a sales director in an industrial company in 2013 and told his Jobcentre Plus adviser he had an idea for a company he wanted to persue.

After being put on the New Enterprise Allowance, he was placed with a mentor from the West Yorkshire Enterprise Agency and then launched ‘Fruity Tipples’.

The company’s main customers are farm shops, delicatessens, wine merchants, wine bars and pubs. They have also been featured at the Good Food Show in Harrogate earlier this year.

Kevan says that when he lost his job he was “like a rabbit in the headlights” but the support of the Enterprise Agency helped him find his feet:

“We always had the idea that we might make fruit vodkas as a business after trying sloe gin on holiday, making the odd bottle for friends and experimenting with recipes.

“Being a sales director, I was aware of what to write from a sales perspective but I got some really valuable help from my Enterprise Agency mentor in putting the proposal together and I still refer back to it now.”

Fruity Tipples uses real fruit in its drinks with no artificial colourings and flavourings in flavours such as sour cherry, lemon and blackcurrant. He continues to manufacture at his home and does all his own bottling and labelling.

He says he always has an eye on the future:

“As we move further afield from West and North Yorkshire, we may find that we have to employ someone or go down the wholesale route. But, for now at least, things are ticking over nicely and I really love working for myself. I have had very high pressure jobs but knowing that this is all for myself is liberating and exciting.”

He adds that the help he got from being on the New Enterprise Allowance was invaluable:

“Setting up a business is a full-time job but you get the freedom to do that on the scheme, as well as lots of support and free courses. My mentor was a great sounding board. They don’t make decisions for you but they are there to ask crucial questions and pin you down on specifics which is very important.”