We made the most of the once in a lifetime cycling event coming to our region, the Tour de France, with a range of activities, many of which supported local charities. 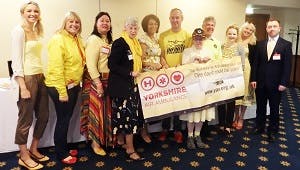 We also sponsored the Huddersfield Criterium on the 4th July. Three fun, fast and furious races for all the family took place in the heart of Huddersfield town centre with proceeds and awareness raised for Kirklees charity One Community Foundation. Held on the eve of The Grand Depart, the inaugural town centre 'circuit road race' attracted approximately 5,000 visitors.

With MY Network partners we also launched charity cycle #MYCycle prior to the Tour de France’s visit to Yorkshire. The cycle was a 50 mile challenge departing from The Shay Stadium in Halifax at 7am on Friday 27th June and riders were welcomed back to a drink and lunch at The Shay Stadium for a celebratory Last Friday Club.

More than £5,000 was raised for MYCycles’ nominated charities which included members Forget Me Not Children’s Hospice and Wakefield Hospice alongside Age UK Kirklees & Calderdale and the Laura Crane Trust.

Chamber Executive Director Andrew Choi, who took part in MYCycle commented: “ MYCycle was certainly tough going but it was for a fantastic cause shown by the riders upon returning from their journey through Mid Yorkshire, to Last Friday Club at The Shay, thanks to all involved and well done!”

The Tour de France cycled past our Huddersfield office and is estimated to have brought in excess of £2m to our region and certainly put Yorkshire on the map as a place to do business.