Nicola described her experience of starting a new business and of her successes since registering her company in August last year. Mr Shapps was particularly impressed by the local business support offered to Nicola, who was helped on her journey by a volunteer mentor.

The Chamber emphasised how volunteer mentors and business-buddies have continued to provide support to start-ups and peers following the scaling back of Government funded business support, however advised Mr Shapps that more can be done to provide a permanent and continuous structure of support for businesses. Chamber Head of Policy Steven Leigh also commented that, in spite of a recent cap on business rates, this tax had created a significant burden on businesses over recent years as high inflation persistently drove rates to unaffordable levels for businesses. 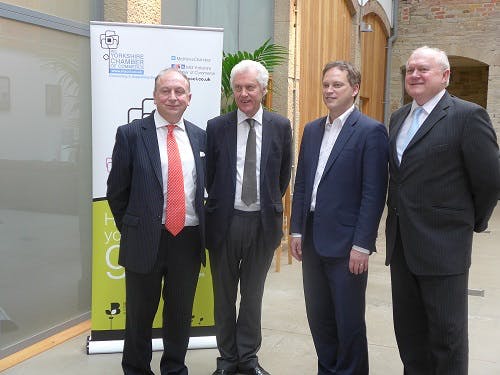 The discussion also touched on the positive effect that expanded National Insurance Contribution allowances will have on employment, reducing firms’ National Insurance bills by £2000 per year. The group then discussed the Government’s ambitions to rebalance the UK’s trade deficit, and the support offered to exporters by the Chamber, through its international trade arm MY Export Hub.

Mr Shapps was then taken on a tour of the Elsie Whiteley Innovation Centre by Chief Executive Barbara Harbinson, meeting resident businesses and viewing the support and services on offer at the Centre.

Grant Shapps was first elected as MP for Welwyn Hatfield in 2005 and was promoted to the Shadow Cabinet as housing minister in 2007. In 2012 Mr Shapps was appointed as the Chairman of the Conservative Party. Prior to his career in politics Mr Shapps founded a design, print, web and marketing business, which he ran until 2009.

"It was great to welcome Mr Shapps to the Elsie Whiteley Centre and to show him the dynamism and strength of Halifax businesses. This was also an excellent opportunity for a senior politician to hear directly from a new start-up business. As a former business owner Mr Shapps will appreciate the pressures felt by businesses and the importance of a consistent business-friendly policy environment to support our businesses to grow.

We hope that this experience has given Mr Shapps a sense of the concerns and priorities of the business community in our region and that these messages will be taken back to Government."