Absolute Media have won the latest Business of the Month prize

Huddersfield based radio advertising experts, Absolute Media (UK) Ltd, have been awarded the Business of the Month for December in a competition run by Eaton Smith Solicitors in partnership with The Chamber and UKTI. 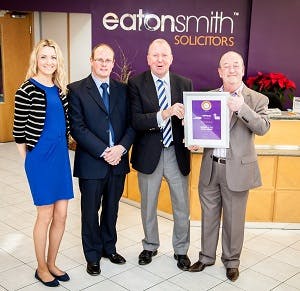 Based in Lockwood, next door to the Chamber’s Huddersfield office, Absolute Media is a company who specialise in producing commercial radio advertising, booking of radio airtime and a variety of other audio/visual work.

The business was formed in 1999 by Alex Mullen and his colleague Rick Fry. Beginning with an office in Aspley, the business grew steadily to the point where additional space was needed, with a move into purpose built, high spec premises in Lockwood Park in August 2012, formally the home of Pennine FM.

This office move was quite a risk as it was well into the downturn of the UK economy, but since moving the firm has gone from strength to strength, with turnover increasing by 100% during the last 6 months compared to the whole of the previous year. Having invested heavily in the most advanced industry planning software available, Absolute Media has the tools in place to deliver successful campaigns on a local, regional and a national basis.

The judging panel were impressed by the way this company goes about its business. Working with an impressive client list which includes Lidl Stores, Pendragon PLC, Harratts Motor Group, United Carpets and Beds, and Cumbria and Kirklees Council to name a few, the business is currently in talks to produce radio commercials for Kia, the leading Korean car manufacturer and so the future looks very promising for this enterprising local business.

Absolute Media Director, Alex Mullen said "It is indeed an honour to be recognised. It’s an even bigger honour to be listened to"

Do you have a business in Calderdale, Kirklees or Wakefield that could win the next monthly award? Download an application form today and see how easy it is to apply. Or for more information contact Ian Greenwood on 01484 821300.