LSi Ltd latest winner of the Business of the Month Awards

Cleckheaton based promotional merchandise and clothing supplier, LSi Ltd, has been awarded the Business of the Month for October. 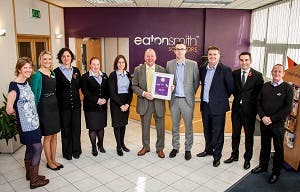 Formed in 1994 by Lloyd Simpson, the business has grown steadily over the past 19 years to become one of the leading promotional merchandise companies in the UK and the largest of its kind in Yorkshire. LSi specialises in providing companies with promotional items to promote their products and services, personalising anything from pens and pencils through to umbrellas and corporate uniforms with company logos etc.

For the first few years the business grew steadily in line with most start-ups and after 5 years with the emergence of email and the internet the business rapidly expanded. This resulted in two office moves and as the business expanded a further move was made in January 2013 to new impressive offices, a warehouse and a state of the art showroom which is the largest of its kind in this country.

Over the past 19 years, LSi has employed in excess of 100 people, most living in the Kirklees area, and has also worked closely with many local companies to help promote and market their own brands including well-known names such as Mintex, Ronseal, Theakstons, Cummins Turbo Technologies to name a few, as well as many large and small companies around the UK.

The judging panel were impressed by the steady organic growth the company has demonstrated and the fact that LSi has experienced record breaking sales figures for this year so far, which is a trend that looks set to continue. With ambitious plans for growth over the next few years the future looks very bright for this fine local business.

Lloyd Simpson, Managing Director said "To win this award is the icing on the cake for 2013, we started the year with a move to our fantastic new offices, in February we won a national award from the BPMA, in October we opened what we believe to be the largest merchandise showroom in the UK, taken on 5 new members of staff this year and exceeded all our sales forecasts. To be recognised for our efforts is just reward for the talented and hard working team of 30 people we have here at LSi. This will give us great impetus for next year our 20th Anniversary."

The Business of the Month Award is run by Eaton Smith solicitors in association with Mid Yorkshire Chamber of Commerce and UKTI. It is open to firms in Calderdale, Kirklees and Wakefield.

Don't miss your chance to win a monthly award and potentially the prestigious annual award, download an application form here to apply.