Since we announced our support to the Town Foundation’s Early Kick Off Breakfast club last year, we have been overwhelmed by the difference the initiative has made to the school we support. 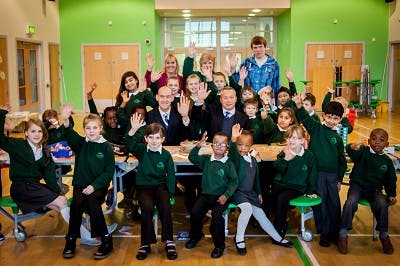 "We are very proud to be part of the Early Kick-Off Breakfast Club scheme. Although we already had an existing breakfast club in school, it wasn’t reaching the majority of our families, due to the cost.  Even though the Early Kick off is still in its early stages, we can already see that we are now reaching families who couldn’t afford to access it before. Many of these families are ‘vulnerable’ in a number of ways, whether through poverty, domestic violence, poor health or other issues. The fact that we can now offer them a free breakfast makes a huge difference, not only to their child’s education, but to the family as a whole.

We have also noticed that we are supporting single parent families in returning to work. Childcare is such an expense, that many parents feel they are better off not working. By returning to work, parents are raising their own aspirations and providing a positive role model for their children.

Our attendance officer has reported that the club has had a positive effect on the attendance of one child who lives outside our catchment area. Now she is attending the Early Kick-Off club, her attendance has improved tremendously, which in turn has helped her learning and social development.

Joining the Early Kick-Off has meant we had to make huge changes to the way we ran our breakfast club, but this has proved to be a positive experience. Despite having more children, staff  have reported that they are less pressured, as we have set routines and structure to the sessions now and they each have their own role. We have a parent and a member of the local community working as volunteers to support school staff.
We currently have almost seventy children on the register, although they don’t all attend at the same time. Our average daily attendance figure is twenty five, but we do expect this to increase once the weather improves. These figures may appear low, but for our school, they are extremely positive.

The support we have received from both the Early Kick-Off team and staff at Total Foods has been first class."

Mandy Taylor, Corporate Fundraising Officer for Huddersfield Town also told us: “I feel incredibly proud to play a role in The Town Foundation charity, it is not only rewarding but very humbling to see each new club launch within our local community.  This is only achievable due to the donations and on going support we have received from numerous organisations, businesses and individuals. Sustainability long term is key and with this in mind, we continuously appeal for additional support and welcome any enquiry either via email: mandy.taylor@htafc.com or telephone: 01484 484197”