Calder Security Named Business of the Month for February

Calder Security has been named as Business of the Month for February in the awards run jointly by law firm Eaton Smith, the Mid Yorkshire Chamber of Commerce, and UKTI. 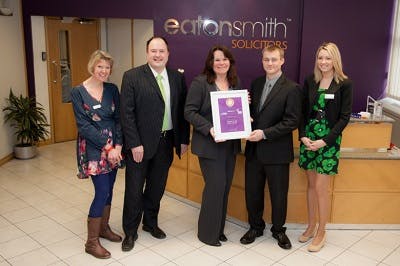 Calder Security was established in 1976, successfully building up a locksmith and safe business serving the general public. In 2006 Simon Cook, an engineer at the firm, bought the company and due to his leadership, investment in new technology and improved efficiency has increased the turnover by 20% each year and moved much of its business into the commercial market. It is now one of the leading security companies in Yorkshire, splitting its business equally between domestic and commercial customers.

Alison Palmer is a partner at Eaton Smith Solicitors and sits on the judging panel. She spoke of why they felt Calder Security stood out amongst the entrants this month:

“Calder Security impressed the Judges as it has adapted to the emergence of electronic security systems and technology, has achieved substantial growth year on year, has established itself as a major player in the security market and has moved into the commercial sector servicing high profile companies. Calder Security was also commended for sourcing its employees locally, for recently obtaining ISO 9001 and for its ambitious plans for the future.”

Eaton Smith hosted a lunch for Calder Security on 14th March where MD Simon Cook met with representatives from the judging panel and received the award on behalf of the company. He spoke of the award:

“We’re delighted to be named Business of the Month. We’re working very hard to build the business and the success we’ve had over the last few years is testament to this at a time when many of our competitors are struggling. Our objective is to grow the business even further and we have exciting plans to achieve this over the next year.”

The Business of the Month Award is open to firms in Calderdale, Kirklees and Wakefield; each month a new winner is chosen and all 12 then go through to the annual Business of the Year award. The ceremony will be held in July where an overall winner will be named. News of previous winners can be found on the Eaton Smith and MYCCI websites.

You can enter by downloading the application form here or contacting Ian Greenwood at Eaton Smith on 01484 821389 for more information.