Chamber Member Veronica Baldwin in partnership with Sarah Wilson and Juliet Chambers battled through the snow on Saturday 26th January to take part in the Association of Speakers Clubs Area Topics Contest on behalf of the Halifax and Huddersfield club.

Each competitor is given 3 minutes to speak on a topic given only at the time of the speech. It was worth the 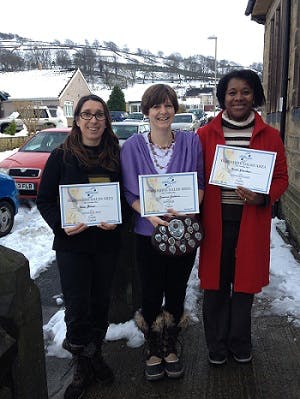 challenge as Veronica Baldwin came away with the individual trophy for best Topics speech and will therefore take part in the District competition on 17th February.

Veronica spoke about “Roundabouts” and took us on a journey through her childhood memories of the Magic Roundabout; Sarah had the topic “Roller coasters” and shared her adrenalin fuelled youth in the theme parks of the USA; Juliet had “Swings” and managed to include all connotations of the word in her 3 minutes!

The judging panel were highly impressed with the standard from all 12 competitors and were particular impressed by the Halifax and Huddersfield team who were all new to competition speaking. Olwen Edwards President of the Club remarked, “We are extremely proud of our 3 members, for their adventurous spirit in venturing to Sutton in Craven in all the snow and for representing our Club and both Halifax and Huddersfield so brilliantly. To compete builds confidence. Winning the best individual topic is the icing on the cake for Veronica .Well done Veronica, Sarah and Juliet.”

The Competition was judged by ex- National President David Granger, current National Vice President Lindsay Dutch and one other.

Inspired by this story? Would you like to learn to speak with confidence? Join the Halifax and Huddersfield club (ASC) on 5th February 2013. ASC meetings on the first and third Tuesday of each month at 7.45pm to 9.45pm in Halifax Town Hall.