Executive Director, Andrew Choi, has shown that he is keen to do more than just talk about Fairtrade by introducing the policies at the Chamber.

When the Mid Yorkshire Chamber of Commerce joined the Kirklees Fairtrade Steering Group, it was keen to do more than talk about the issues.

Executive Director, Andrew Choi’s first thoughts were about getting the fairtrade message out into the business community although he was also interested in implementing fair-trade policies at the Chamber of Commerce itself. 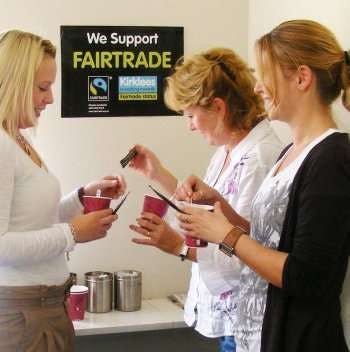 d presented an obvious opportunity to make a switch to fairtrade. However, his perception was that this was going to add extra cost.

Andrew explained, "The Chamber is sometimes thought of as being subsidised in some way when, in fact, we are a private commercial operation with no government backing at all.

"Like every business, we look at our finances carefully and treat added expense with zero tolerance – whilst I’m committed to fairtrade, I’m also committed to sound financial management."

The Chamber undertook a cost comparison exercise to see if it really was more expensive to buy fairtrade supplies rather than "mainstream" alternatives. They discovered that, whilst some refreshment items were slightly more expensive, others were cheaper and the overall cost would be reduced if they made the switch.

Andrew added, "In the end, it was a no-brainer for us and it came as a big surprise that the perception of higher cost just didn’t apply in our case."

The Chamber now advises companies to follow suit and look at the individual business case for fairtrade rather than simply assuming it’s going to be a costly exercise. The benefits to producers are obvious but if ethical sourcing can also save money for a business it’s a worthwhile win-win.